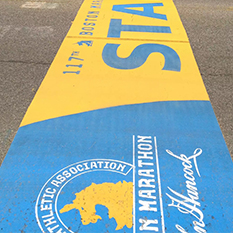 Hopkinton, MA (April 17, 2014) – Outside Interactive, a Boston-based startup and developer of forward motion video software technology for treadmill runners, today announced it has opened its offices at 17 Main Street in Hopkinton, Mass., otherwise known as the starting line of the world famous Boston Marathon®. The office will serve as a basecamp for product development and marketing. “In trying to determine the best location for our office, I can’t think of a more inspiring site than the corner of Main Street and Hayden Rowe,” stated Gary McNamee, Outside Interactive’s President and Founder. “In addition, each year we will have the tremendous honor of participating in the ceremonies surrounding the race, welcoming thousands of athletes from around the world who have made the pilgrimage to take part in the most famous footrace on earth.”

To celebrate the office openings, Outside Interactive will be showcasing its product offerings right in front of its offices the weekend of and including Marathon Monday. A tent with a treadmill, iPad and large flat screen TV will be available for runners to try out the Virtual Runner app. They will also be offering a “Heartbreak Hill Challenge.” Participants can take a run up a “Virtual” Heartbreak Hill right there on the treadmill at the same angle and pitch as the actual hill. For each runner who completes the approximate 2 minute challenge, Outside Interactive will make a donation to the One Fund.

Outside Interactive is a Hopkinton, MA developer of Virtual Runner for Windows and Virtual Runner for the iPad, revolutionary patent pending forward motion technology solutions featuring famous race courses, popular running routes and scenic destinations, all shot in HD from a runner’s point of view. The company was founded in 2011 by Gary McNamee, a lifelong Boston resident, avid runner and entrepreneur. He developed Virtual Runner after becoming bored on the treadmill and frustrated with not being able to train properly for the B.A.A. Boston Marathon® in New England’s unpredictable and often harsh weather. For more information, visit www.outsideinteractive.com or find Outside Interactive on Facebook and Twitter.