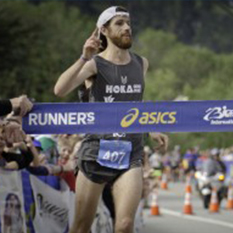 HOPKINTON, Mass., September 8th 2014 – Outside Interactive, a developer of interactive forward motion video technology for treadmill runners, announced today that elite American runner Michael Wardian has signed on to the brand as an athlete ambassador.

Wardian, an endurance athlete with a focus on marathons and ultramarathons from Arlington, VA, will work with race directors of various events he has competed in to help create digital versions of their courses. Treadmill runners using their iPad® or tablet device will then be able to interactively train or even compete on the virtual course no matter where they are in the world.

“This partnership represents our commitment to creating digital versions of the most exciting race events anywhere,” stated Gary McNamee, Outside Interactive’s president and founder. “Michael has competed in many of these races and we hope to learn from him which ones would have the most appeal to runners of all abilities.”

Outside Interactive’s Virtual Runner app, along with its professionally shot HD videos of race courses filmed on race day, will allow bored treadmill runners to interactively experience a race course for training, or to compete remotely if the race sells out or they are “geographically challenged.” Its goal is to support runners of all levels who represent the sacrifice, commitment and passion of the sport.

Wardian grew up playing lacrosse in Northern Virginia and when he stopped playing Division 1 lacrosse at Michigan State University he applied that passion to endurance sports. Michael enjoys pushing the boundaries of what is possible and testing his limits. He owns multiple national championships in the 50K, 50 mile (road & trail) and 100K. Michael runs for Team USA for 50K and 100K Worlds and competes all over the world. When not training and competing, Wardian enjoys spending time with his young family, including two boys, Piece (8 years) and Grant (5 years), a beautiful wife, Jennifer and their puppy named Rosie.

I’m extremely excited to be partnering with Outside Interactive,” said Michael Wardian. “They share my passion for the sport. In addition, due to a hectic schedule, I do much of my training on the treadmill, and we all know the treadmill can be a challenge. What better way to preview an upcoming race than to experience the course interactively and virtually ahead of time and at my own pace?”